Last week marked two significant milestones in the marriage equality movement: Florida, our country’s third most populous state, became the 36th state to allow marriage for same-gender couples and started marrying couples on January 5th and 6th – causing the percentage of Americans living in a marriage equality state to climb above the 70% mark. Days later, on January 9th, one of the most conservative Circuit Courts of Appeals in the country heard three marriage equality cases.

Marking both milestones was MEUSA’s own Program Manager, Tracy Hollister. Taking advantage of a generous MEUSA supporter’s offer of complimentary airfare, Tracy was able to attend a Florida marriage ceremony for over 100 couples and the 5th Circuit Court of Appeals’ hearings of three marriage cases from Texas, Louisiana and Mississippi a few days later. "I was so grateful to be there for both marriage equality moments,” said Tracy. “I was able to share in significant events not only of our movement, but in the lives of couples who were both marrying and seeking the freedom to marry through the courts,” she says, noting that she was also able to solicit more stories for MEUSA’s Getting to I Do program, which chronicles and archives the personal marriage equality stories of LGBTQ couples and allies.

Although the stay on Judge Hinkle’s ruling against Florida’s ban on marriage equality ended at midnight on January 5th, Tracy noted that "In Miami, they started offering marriages mid-day on Monday, January 5th. After my friend Meredith Ockman, a regional leader with the National Organization for Women, told me where some midnight weddings would be occurring, I got on a plane and flew to Miami. Upon arriving, I went directly to the South Palm Beach County courthouse where I witnessed the simultaneous wedding of about 100 couples." 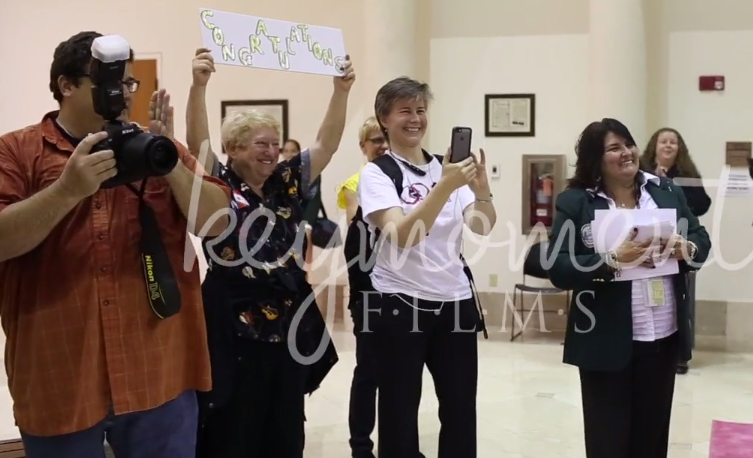 “The weddings were marked by a lot of joy, happiness, hugs and enthusiasm, while TV cameras and cell phones recorded history unfolding in the crowded hall,” recalled Tracy. The Clerk /Comptroller of Palm Beach County, Sharon Bock, officiated, and Suze Orman attended as a celebrity guest. "It was fun and exhilarating -- a joy to be there.” (Video of parts of the ceremony, with a glimpse of Tracy around 19:28:)

“This was the third time I witnessed the first moments same-gender couples experienced full equality under the law. My first was in New Jersey in October, 2013, then in my home state of North Carolina in October, 2014. I often wish those who still do not support the basic freedom to marry the person you love could see how much marriage means to these couples and their families and friends.” 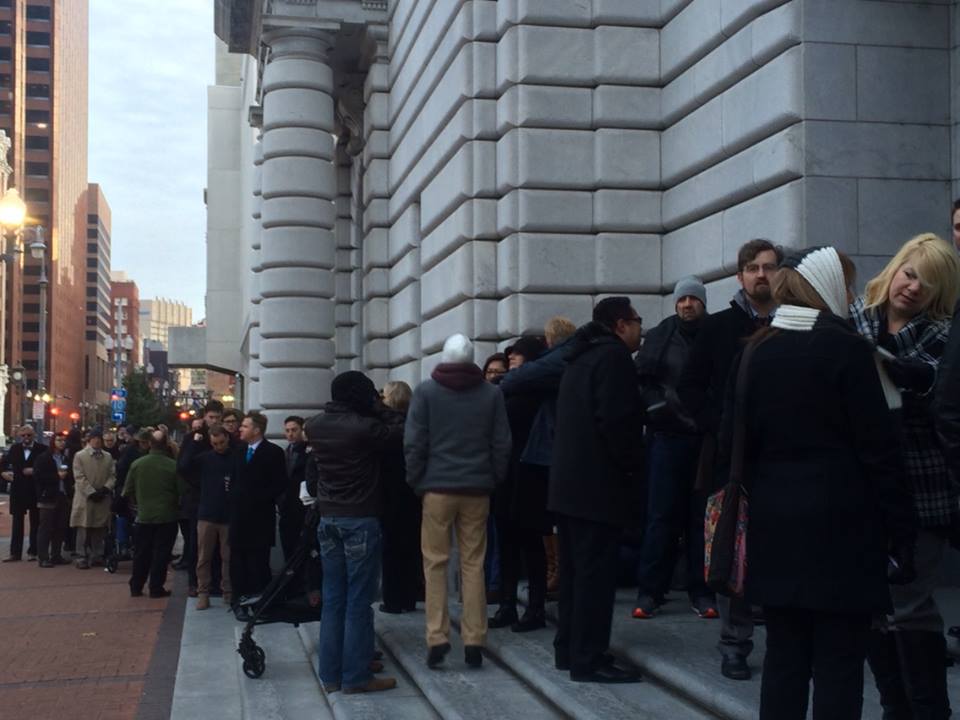 A few days later, on Friday, January 9th, attention pivoted to New Orleans, where the 5th Circuit Court of Appeals heard oral arguments over the validity of the marriage equality bans in Texas, Louisiana and Mississippi. "We stood in line at 6:30 in the morning, in the dark, in order to get into the courthouse. It was 38 degrees outside but our excitement at being there to witness history kept us feeling warm and hopeful. There were about 150 people in line. I shared some traditional New Orleans King Cake with those in line and it seemed all, or nearly all, in line were marriage equality supporters."

Among the others in line close to Tracy were Shannon Minter of the National Center for Lesbian Rights, who argued the case for marriage in front of the California Supreme Court in2008, and Peggy Tomsic, who argued the 10th Circuit Court of Appeals case that led to marriage equality in Utah. “Right in front of me in line were these two legal giants. It was inspiring to be among them,” said Tracy. “Once inside, I got to be in the actual courtroom for the Louisiana and Texas cases and I was in an overflow room for the Mississippi case."

What Tracy could not help but notice were the differences in the approaches of pro and anti-marriage equality attorneys during their legal arguments. “I heard how solid and well prepared our arguments were. Our powerhouse legal team included Camilla Taylor of Lambda Legal and the Forum for Equality for the Louisiana couples, Neel Lane for the Texas plaintiffs, and Roberta Kaplan, of 'Edie Windsor' fame, who argued on behalf of the Campaign for Southern Equality for the Mississippi couples. Kaplan spoke eloquently and passionately about how we are treated as second class citizens deprived of our dignity and that marriage affects every sphere of our lives. That denial of it humiliates our children. She argued that these marriage bans are too irrelevant, irrational and disconnected from states’ interests to pass constitutional muster. In response to the ‘responsible procreation for heterosexual couples’ argument, a common refrain from the other side, Kaplan said, ‘We agree that children should have married parents.’ She pointed out that the Mississippi attorneys had conceded that gay parents are just as capable as straight parents and that Mississippi has the highest percentage of LGBT families with children – with 29% of LGBT families.” Tracy beamed, “Our arguments were persuasive and well argued.”

Tracy continued, “What struck me about the other side’s arguments is how narrow they are. They require ignoring huge swaths of law, the interests of children of same-sex couples, and history itself. For instance, a focus on states’ rights to define marriage ignores the boundaries of that responsibility - that state laws must also meet the requirements of the Federal constitution, including the 14th Amendment and its guarantee of equal protection and due process. Secondly, a focus on the benefits of marriage being an incentive for opposite gender couples to marry before they have kids ignores the state’s interest in protecting the children of same-gender couples through the protections, stability and dignity that only marriage provides. Finally, one of the three judges repeatedly
focused on an outdated, one-paragraph, 1972 U.S. Supreme Court dismissal of an appeal that said there was no federal question in a case involving a same-gender couple from Minnesota who sought to marry. But he ignored the historical context of the time. It does 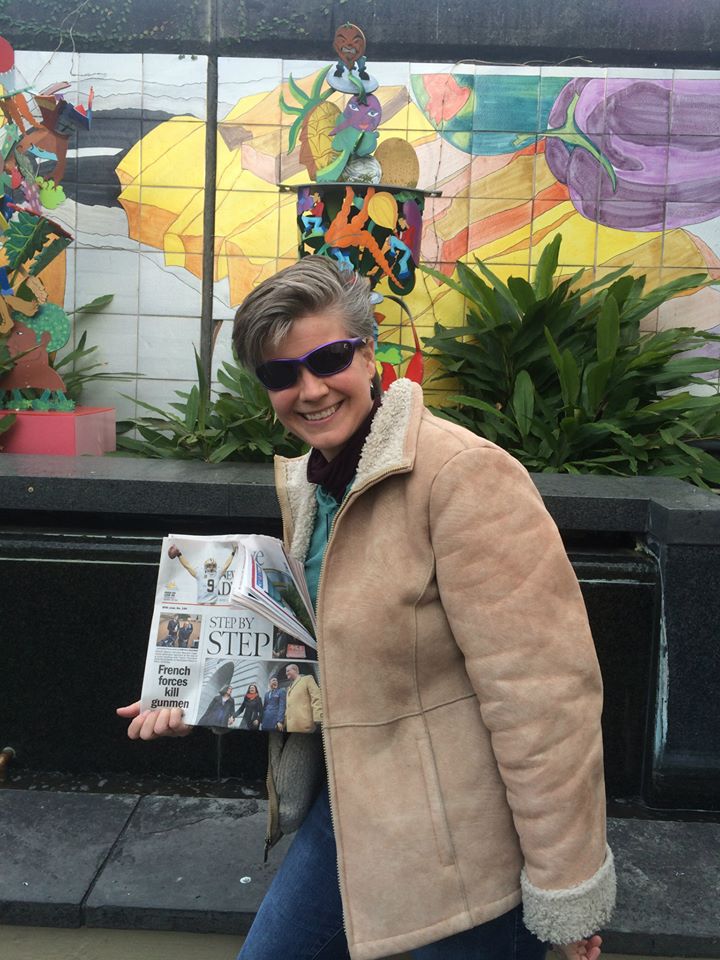 not take a lawyer to understand that there have been significant legal developments in the 42 years since 1972, including the US Supreme Court’s 2003 decision that sexual activity between members of the same gender can no longer be criminalized. Further emerging legal consensus since the June 2013 Windsor decision has rendered the 1972 decision inconsequential, said Tracy, before exclaiming, "Even in this most conservative court, in marriage cases from states with some of the lowest levels of support for marriage equality, I still believe - given the strength of our arguments and the types of questions we got from two of the three judges – that we’ll have a positive ruling from the 5th Circuit in the near future!”

To learn how to share your own experiences related to marriage equality, you are welcome to attend one of the two upcoming webinars Marriage Equality USA has scheduled on January 20th and 22nd. Sign up here!