Marriage Equality USA (MEUSA) began as an idea in 1996 with a handful of activists who believed that same-sex couples and their families should have the right to civil marriage. They were angry that the federal government wanted to pass a law barring LGBT people from this right (the Defense of Marriage Act, 1996). 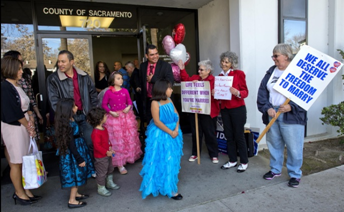 The organization officially began as Equality Through Marriage on 12 February 1998 - National Freedom to Marry Day. By August of 1998 the name was changed to Marriage Equality New York (MENY). MENY was at the forefront of educating and building awareness on why marriage matters, including building the first public education workshop on the topic, “Marriage Equality 101.” MENY soon expanded its work to provide education and resources directly to elected officials. 2004 saw the first large-scale public awareness event, the annual Wedding March across the Brooklyn Bridge. Attended by celebrities, government officials, community leaders and more, Wedding March participants earned media coverage across the state and regionally. Other large-scale events included the “Walk A Mile in My Shoes” (2007) public art and education installation in New York’s capital, as well as the annual statewide Marriage Equality Day (2010). In 2008, a separate state political action committee was also established called MENY PAC to expand the types of work that could occur in New York. Early leaders of MENY became nationally recognized as leaders in the movement including Connie Ress, Cathy Marino-Thomas, Robert Voorheis, Michael Sabatino and James Loney. 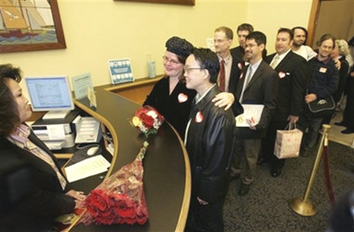 The success of MENY inspired activists in California, who were facing that state's 2000 anti-marriage referendum (Proposition 22, the “Knight Initiative”), to start a sister organization. With the help of MENY and Ress, Marriage Equality California (MECA) was founded in 1999 and was the primary advocate for marriage equality in California. MECA became known both statewide and nationally for introducing the nation’s second civil union’s bill after Vermont (and the first that would grant full state and federal rights to couples), organizing mass-marriage actions on Valentine’s Day to request marriage licenses from county clerks, and for organizing the national Marriage Equality Express bus tour which culminated in the first national rally for marriage equality in Washington D.C. Many of MECA’s founders and leaders would become recognized nationally for their work including Davina Kotulski, L.J. Carusone, Jesús Lebrón, Molly McKay and Mark Levine. McKay in particular would be remembered for wearing a wedding dress at MECA events and Kotulski for introducing the title “Love Warriors” to describe volunteers working in the organization. 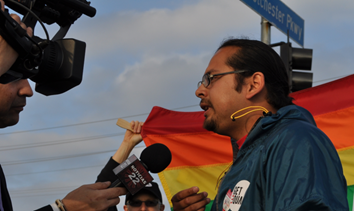 In 2006, after a short-lived merger between MECA and another statewide equality group, the previous leadership of MECA officially re-launched Marriage Equality USA (MEUSA) as a national grassroots organization. MEUSA would grow to over 20 county chapters in California, state chapters (later Regional Organizing Committee's) across the country including Arizona, Florida, Indiana, Iowa, New Hampshire, Ohio, Pennsylvania and Virginia, as well as outreach positions to work with specialized communities such as Parents, Seniors, Communities of Faith, and multiple ethnic communities. In January of 2009 Marriage Equality USA became a registered 501(c)(3). 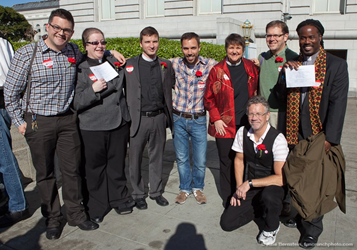 After an unsuccessful attempt to pass marriage equality legislation in New York in 2009, MENY co-led a coalition of organizations, supported by Gov. Andrew Cuomo, to pass the New York Marriage Equality Act in June 2011. Because of their rich shared history and mission, MENY and MEUSA announced their intention to consolidate and bring their combined resources and experience to push for marriage equality in states across the country and at the federal level. Cathy Marino-Thomas, President of MENY, and Dave Janis-Kitzmiller, President of MEUSA, joined together to serve as Co-Presidents of the new Board of Directors and Brian Silva, Interim Executive Director of MENY, was brought on as the new Executive Director of the combined organization. 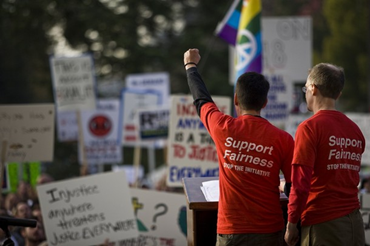 Until marriage was achieved in 2015 and MEUSA closed at the end of 2017, the organization continued its leadership at both the local and national levels. It launched wildly successful programs such as the National Equality Action Team, “Getting to I DO: Journeys of Marriage Equality” and a variety of education and training initiatives. MEUSA continued to be at the forefront of this movement, working with partners and volunteers, to bring marriage equality to our communities.

Marriage Equality USA pioneered multiple tools used to win marriage equality in the United States. Many of these tools became vital resources used by both the marriage and other progressive movements in general to further our common goals: