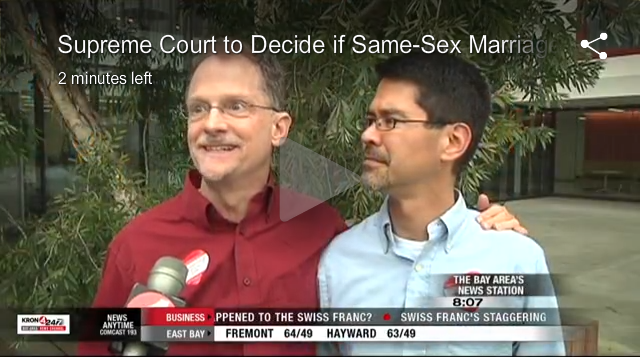 The Supreme Court says it will decide whether same-sex couples nationwide have a right to marry under the Constitution. Marriage Equality USA Communications Director Stuart Gaffney and his husband MEUSA Director of Legal & Policy John Lewis are interviewed in this video news story by Brian Shields from KRON Channel 4 in the San Francisco Bay Area, on 16 January 2015.

The justices said Friday they will review an appellate ruling that upheld bans on same-sex unions in four states. The case will be argued in April and a decision is expected by late June. Kentucky, Michigan, Ohio and Tennessee are among the 14 states where gay and lesbian couples are not allowed to marry. The number of states that permit same-sex marriage has nearly doubled in three months as a result of federal and state court rulings. The justices’ decision to turn away same-sex marriage appeals in October allowed some of those rulings to take effect. Florida last week became the 36th state to issue marriage licenses to same-sex couples.