On the Road to LGBT Equality in Japan 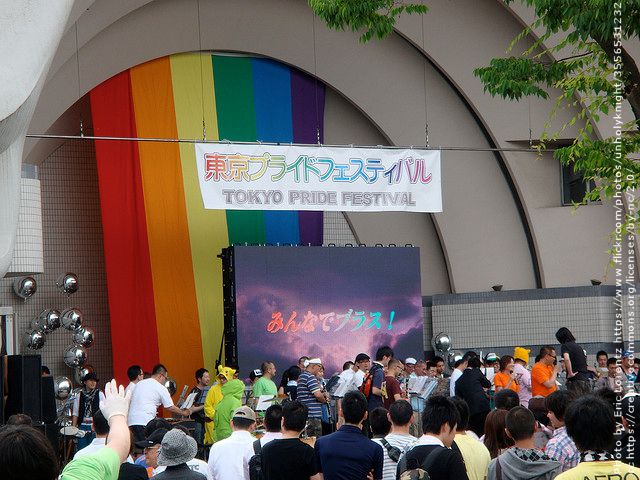 Imagine living as an LGBT person in a country of over 120 million people where sexual expression between people of the same gender has essentially never been criminalized, where no conservative Christian political movement exists, and where violent crime is so low that gun ownership is less than one percent that of the United States.

That country is Japan.  For the last two years, we have had the honor of being invited to Japan to give public talks, participate in symposiums, and teach classes about the movement for marriage equality in the United States.  We have also met with numerous LGBT leaders across the country to share our experiences, compare conditions for LGBT people in our two countries, and to talk about strategies for achieving full equality.

We received the invitation to speak in Japan from a heterosexual Japanese professor of Asian American studies who heard us give a presentation in the United States.  This professor has a three year old child and realized that her child could turn out to be LGBT, and that LGBT equality was not just an issue for which she could be an ally, but was her issue, too.  She wanted her child to be able to grow up in a world where he could be free to be who he was without hiding and without facing discrimination.

Japanese society’s relative lack of public hostility to LGBT people appears to be a double-edged sword to Japanese LGBT people’s living their lives openly with full equality.  Less adversity can reduce the sense of urgency to enact laws to protect LGBT people. Harmony is one of the most important societal values in Japan, and many Japanese LGBT people told us that coming out is particularly difficult in Japan, largely due to pressure to conform and to social expectations.  Although Japanese LGBT people benefit greatly from the low risk of physical violence, many appear to fear losing their jobs if they come out.

The issue of marriage equality is particularly complex in Japan.  For many, Japan’s marriage law seems to be outdated, not just from its exclusion of LGBT couples, but as it applies to heterosexual couples.  For example, Japanese marriage law requires one of the spouses (in practice, nearly always the woman) to change her name and taxes a second spouse’s income so severely that many spouses have no financial incentive to pursue a career.  Japanese LGBT activists are developing a partnership law open to all couples that remedies these limitations and serves the needs of modern couples – as they work for marriage equality as well.

Using marriage equality as a barometer of public attitudes on LGBT equality, recent polling revealed that 70 percent of Japanese in their 20s and 30s support marriage equality.  Although support among the population as a whole is not as high as in some industrialized nations, 40 percent of Japanese are still undecided on the issue, and those who have made up their mind overwhelmingly support equality.  We believe that the future for LGBT people in Japan is bright.