"Our very lives were before the Court today," emphasized MEUSA Communications Director Stuart Gaffney. "The Justices now have the evidence, and also the real human faces and stories of our marriages and families. We are more hopeful than ever that they will rule with their hearts as well their minds in favor of the freedom to marry for all loving couples in all 50 states."

"We are so proud of the tens of thousands all across the county who showed up to bear witness to history," said MEUSA Executive Director Brian Silva. "In the courtroom, on the steps of the Supreme Court, and at community events across our nation our voices have been heard. Today our community, in all its beautiful diversity, stood together as one seeking equal justice under law."

"The Justices today were presented with the humanity of the plaintiff couples and families in the courtroom today, and now they have before them the extraordinary love stories from all across the country that have been submitted to the Court," noted MEUSA Legal and Policy Director John Lewis. "Today at the Supreme Court it felt as if the whole world was watching, bearing witness to our collective hopes and dreams of freedom and justice for all."

"Today's hearing highlighted how important it is that marriage equality is leading the way towards full lived equality for LGBTQ people in all aspects of our lives," said MEUSA member Shelly Bailes. "Our movement and momentum will continue, as we work to ensure that we have the freedom to marry from coast to coast, as well as freedom from discrimination when we put our wedding pictures up at the workplace," concluded her wife, MEUSA member Ellen Pontac.

Marriage Equality USA was a lead organizer of the Unite for Marriage Rally on the steps of the U.S. Supreme Court this morning, and we submitted an amicus brief in the marriage case in early March 2015.

Together with our Unite for Marriage partners, we will be organizing community events around the country to take place on the day the Supreme Court announces its decision, anticipated toward the end of the current term in late June. 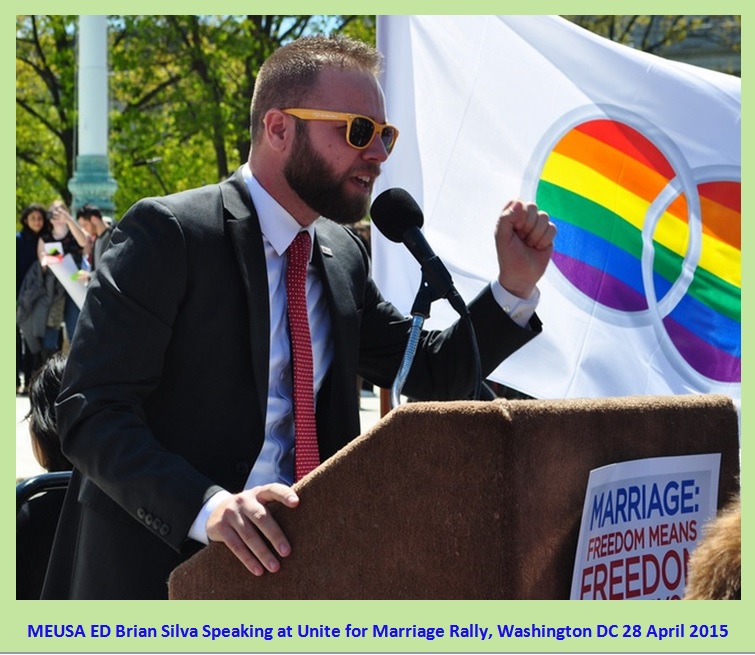