John Lewis — A Marriage Equality Veteran of More Than One Battle

At the heart of MEUSA lie a handful of founding volunteers who have navigated the bumpy ride that has been the marriage equality movement for over a decade. John Lewis, MEUSA’s Legal and Policy Director, is one such MEUSA volunteer.

Molly McKay Williams, the former Executive Director of Marriage Equality California, and the woman who first recruited John and his husband Stuart as spokespeople and leaders for the marriage equality movement back in 2004, says, "Part of the joy of this work is doing it with people you love and admire. I love and admire John for his generous spirit; his deep, searching, introspective personality; and his great sense of humor. Our experiences in this movement, the highs and the lows, will be some of my most treasured life experiences." 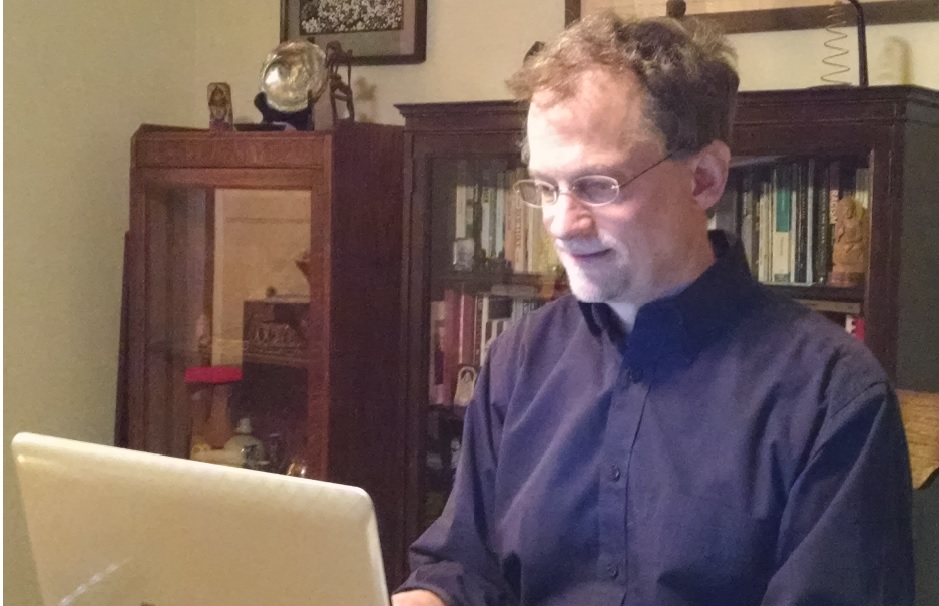 With the United States Supreme Court’s recent historic, nationwide, marriage equality decision, John considers the two Amicus (friend of the court) briefs* he filed on behalf of MEUSA in the 2013 and 2015 Supreme Court cases to be highlights of his last few years with the organization. “Creating and filing these briefs was so rewarding because we applied MEUSA’s mission to empower people to tell their own stories and advocate in their own voices to the appellate legal setting, which is often detached from authentic human experience. In our briefs, lesbian, gay, bisexual, and transgender Americans and their families spoke directly to the Justices and expressed in their own words why the liberty and equality guarantees of the Constitution should apply to us. We used these voices to make the legal argument for marriage equality. We were gratified when Justice Kennedy in both his 2013 and 2015 opinions wrote in very human terms about the importance of equality under the law,” says John.

John also considers moderating the MEUSA National Community Calls a highlight of his MEUSA involvement in recent years. “I’ve greatly enjoyed moderating the community calls that MEUSA has hosted after every appellate marriage equality hearing over the last few years. We always invite attorneys and activists from the states involved to participate. We have a robust and lively conversation with lots of questions and back and forth. I am always impressed with the level of commitment and insight that so many of the people who call in have.”

David B. Cruz, Professor of Law at the University of Southern California Gould School of Law, and a legal expert who participated on several MEUSA National Community Calls, noted, "John’s contributions as moderator for MEUSA’s community calls have been invaluable. He displays a knack for posing questions in ways that go to the core of the issues, prompt speakers to give answers both accessible and precise, and help the country better understand the extraordinary developments MEUSA has been chronicling. His ability to contribute substantive information to those calls boosts his great value to the organization." 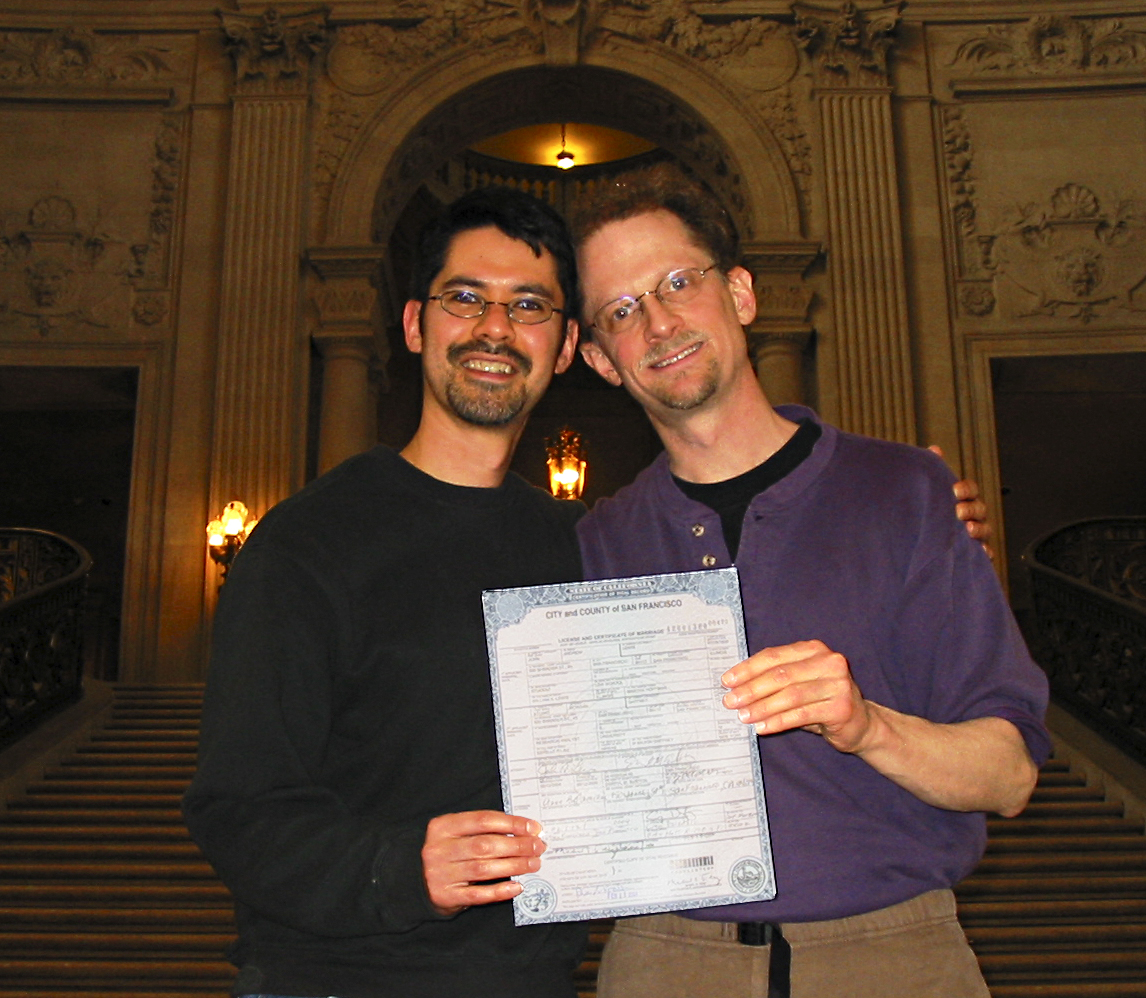 “However, our marriage and those of over 4,000 other couples were taken away six months later when the California Supreme Court ruled that San Francisco could not issue the licenses on its own. We then joined the ongoing lawsuit with other couples and the City of San Francisco, arguing that California's ban on marriage for same-sex couples violated the state constitution. In May, 2008, we all won a tremendous victory and Stuart and I and an estimated 18,000 same-sex couples married in California before Proposition 8 passed in November 2008.”

It was their first marriage ceremony, the one that would later be invalidated, that propelled the couple to advocacy. “On February 12, 2004, when we heard the words ‘by virtue of the authority vested in me by the State of California, I pronounce you spouses for life,’ we felt something transform within us,” John says. “We felt for the first time in our lives our government treating us as equal human beings as LGBT people. That experience changed everything for us. We realized that we had always thought that somehow as LGBT people we would always be treated as not quite equal. At that moment, we committed to doing everything in our power to make the dignity that comes with our government treating us as fully equal human beings a lasting reality for LGBTQ people.”

“Although that marriage was taken away from us,” John says, “there was no turning back. And that's where Marriage Equality USA came in. We joined thousands of others working with the organization because the organization's mission was to enable people directly affected by marriage discrimination to advocate in their own voices as they best see fit why equality is crucial. We have immensely enjoyed lending our voice and helping others tell their stories and share their voices with the world.”

Like many same-gender couples who married immediately upon legalization, John and Stuart had already lived nearly two decades as a married couple in every sense of the term — other than legal recognition. “We met 28 years ago and,” says, John, “from the day we met, we always wanted a lasting, committed relationship. But back then, marriage appeared as something that we as LGBTQ people would never have access to. Marriage would always be for someone else, and we would always be in the audience attending someone else's wedding.”

John’s sense of the injustices perpetrated by lack of legal recognition of same gender marriages grew steadily over time. “As the years went by together, we became increasingly aware of the many legal protections that come with marriage and we became increasingly upset that we were deprived of these. We asked, ‘why would we not have spousal social security benefits upon retirement? Why are we paying thousands of dollars more in taxes just because we were gay?’ We were encouraged by, and took part in, various domestic partner benefits that became available. But then we realized that full marriage equality was something that rightfully belonged to LGBTQ people.” 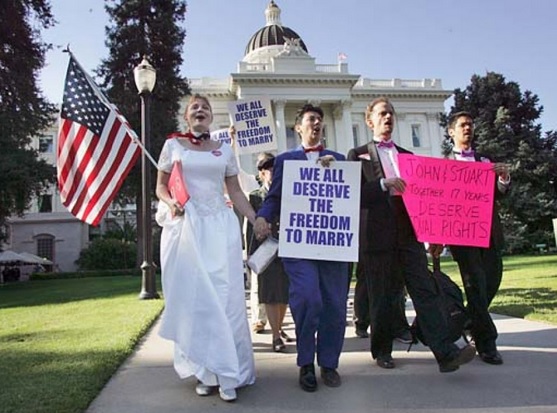 John’s MEUSA volunteer activities have extended far beyond the legal and policy realms to include core, “press-the-flesh” events for the public. Among the most memorable, according to John, was the 2004 National Marriage Equality Express Caravan from coast to coast -- San Francisco to Washington DC. “We and other activists shared our personal stories in places like Cheyenne, Wyoming, Indianapolis, Indiana, and Columbus, Ohio, culminating with a national rally at the U.S. Capitol. “It was a wonderful experience to connect to LGBT communities all across the country and to help educate the public in places that had little familiarity with marriage equality.”

The “Decline to Sign Campaign,” to try to prevent Prop. 8 from going on the 2008 California ballot, was another activity that stands out in John’s memory. “We, and many other courageous, LGBTQ people, stood aside paid signature gatherers in the Central Valley of California to tell Californians about our lives and to explain to them why they should not support an initiative measure that would take away the freedom of LGBTQ people to marry in California. Although Prop. 8 made the ballot and passed, I am very proud of how Marriage Equality USA volunteers skillfully stood up for the lives of LGBTQ people under sometimes very hostile conditions. Marriage Equality USA volunteers were a paragon of nonviolent strength and resistance.”

John’s advocacy work has also extended beyond US borders. He says, “Partnering with Asian Pacific Island Equality and the Gay Asian Pacific Alliance, we created the first ever marriage equality floats in the San Francisco Chinese New Year Parade. As my husband Stuart is mixed race Chinese American, we were honored to present our lives along with the lives of other members of the LGBT API community to the world through the parade, which is broadcast worldwide, especially in Asia. The collaboration, skill and sensitivity that API Equality, GAPA, and Marriage Equality USA brought to this project was exemplary.” 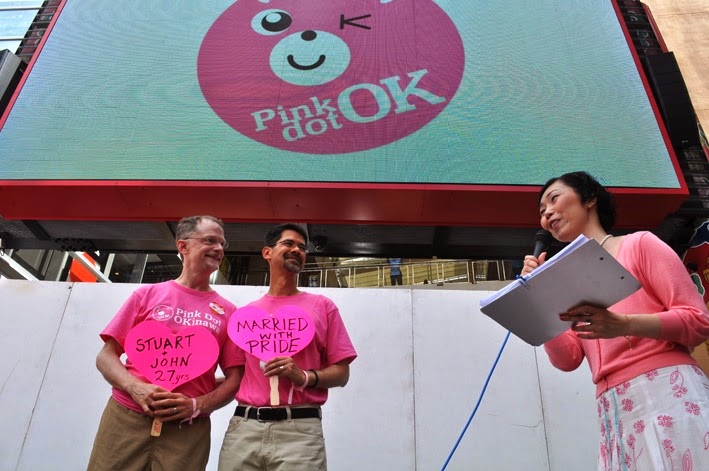 Over the last two years, John (along with Stuart) has taken MEUSA's message to Japan. “We presented the organization's work at universities and at meetings with Japanese LGBTQ leaders, with whom we are now collaborating. We also participated in historic marriage equality events as representatives of Marriage Equality USA at Pink Dot Okinawa.”