When we finally had a few moments (amidst the excitement and jubilation of June 26) to sit down and read the Supreme Court’s entire Obergefell marriage equality decision, we, like many other Americans, were stunned to read Justice Clarence Thomas’ assertion in dissent that “[s]laves did not lose their dignity (any more than they lost their humanity) because the government allowed them to be enslaved.” In the next sentence, Thomas made matters worse by claiming that Japanese Americans held in “internment camps did not lose their dignity because the government confined them.”

Of course during slavery, millions of slaves shipped from Africa to the Americas not only lost their dignity and their humanity, but their very lives. With respect to the removal and incarceration of Americans of Japanese descent during World War II, Congressman John Rankin, D-Mississippi, spoke for many Americans unfortunately when he proclaimed in late 1941: “Once a Jap always a Jap…. I’m for catching every Japanese in America, Alaska, and Hawaii, now and putting them in concentration camps....”

Justice Thomas attempts to justify his assertions by claiming that, as articulated by the Framers of the Constitution, our nation has always “understood” “human dignity … to be innate” and therefore, the government could neither “bestow dignity” nor “take it away.” Thomas tries to explain: “When the Framers proclaimed in the Declaration of Independence that ‘all men are created equal’ and ‘endowed by their Creator with certain unalienable Rights,’ they referred to a vision of mankind in which all humans are created in the image of God and therefore of inherent worth. That vision is the foundation upon which this Nation was built.”

As a factual matter, Thomas’ claim is staggering given that the Framers unquestionably considered the term “all men” to mean white men, not slaves, Native Americans, or other people of color, and the Framers did not endorse full legal and social equality for women. If our nation from the beginning had actually understood “human dignity” to be innate for all people, our federal, state, and local governments would not have permitted legally sanctioned racism, sexism, homophobia, and other types of discrimination and prejudice to persist throughout its history.

Justice Anthony Kennedy writing for the Supreme Court majority recognizes these facts by explaining that “[t]he nature of injustice is that we may not always see it in our own times” and that the Framers far from understanding the full dimension of human rights “entrusted to future generations a charter protecting the right of all persons to enjoy liberty as we learn its meaning.” The Court explained that “new insights and societal understandings can reveal unjustified inequality within our most fundamental institutions that once passed unnoticed and unchallenged." Indeed, the Court recognized that at the founding of the United States, “same-sex intimacy … had been condemned as immoral by the state itself in most Western nations, a belief often embodied in the criminal law.”

Further, Justice Thomas appears to be arguing in his dissent that his view that as an abstract or philosophical matter people do not lose their dignity no matter how inhumanely they are treated means the Constitution plays no role in protecting Americans’ dignity. The Constitution says no such thing. As the majority recognizes, the Constitution pertains to how the law affects people’s lives, and it prohibits the government from undermining Americans’ fundamental liberty, equality, and dignity. Attaining legal dignity and equality integrated with social, economic, and cultural respect enormously benefits the lives of people who have been deprived them. Indeed, human beings’ actual lived experience of dignity makes whatever innate dignity they possess worth having. As Justice Kennedy summed, LGBTQ people in seeking marriage equality “ask for equal dignity in the eyes of the law. The Constitution grants them that right.”

A well known example of the Supreme Court’s recognizing the effect of the law on people’s dignity is Brown v. Board of Education, where the Court held that de jure public school segregation imposed a “badge of inferiority” on African American students in violation of the Constitution. The Court stated that government’s separating African American students “solely because of their race generates a feeling of inferiority as to their status in the community that may affect their hearts and minds in a way unlikely ever to be undone.” The Court affirmed that the “impact” of such segregation was greater because “it has the sanction of the law ….” People are social beings, and the way our government treats us can profoundly affect us both materially and as a matter of self-worth and dignity. Messages we receive from our family, our community, society, and the law can influence our psyches beginning at an early age and our sense of well being.

The Court in Obergefell, describes how without marriage equality, same-sex couples’ “children suffer the stigma of knowing their families are somehow lesser. They also suffer the significant material costs of being raised by unmarried parents, relegated through no fault of their own to a more difficult and uncertain family life.” The Court concluded that the marriage bans “thus harm and humiliate the children of same-sex couples.” And the Court held that “the right to marry” is no “less meaningful for those who do not or cannot have children.”

Marriage Equality USA’s amicus brief in Obergefell amplified the plaintiffs’ personal stories and presented the voices of other LGBTQ Americans as they expressed the importance of equal dignity under the law to them. For instance, “[w]hen Jennifer Hassler and Karina Tittjung of Broken Arrow, Oklahoma, obtained their marriage license on October 6, 2014, after eight years together, Jennifer said: ‘We are all human beings…. This license . . . makes me feel like I’m a human being recognized in these great United States.’”

Brigadier General Tammy Smith, the first openly lesbian or gay general in the American military, expressed her gratitude to her wife Tracey Hepner for “helping [her] cut loose the shackles of those 26 years in the military, of having to hide a part of myself,” and Tracey recounted “how liberating it is” that they could be their “authentic selves.” A close friend of Vivian Boyack and Nonie Dubes, who married in Iowa after 70 years together, observed: “They had learned to live with their heads down so long. And now they don’t have to live with their heads down.” 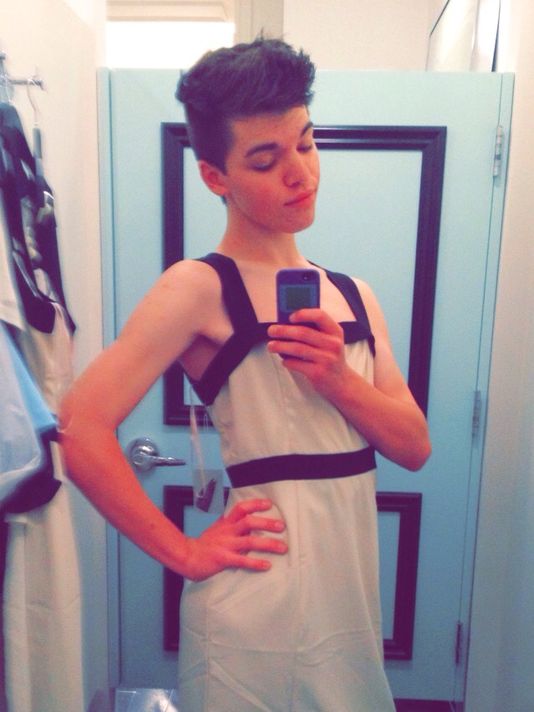 We end with the haunting and urgent words of Leelah Alcorn, the 17 year old transgender youth who committed suicide late last year and stated in her suicide note she published online that she did so because she saw no hope of being able to live as her authentic self. Leelah recounted that when she revealed to her mother that she had felt “like a girl trapped in a boy’s body” since she was four years old, her mom’s saying she was “wrong” made her “hate” herself. According to Leelah, she lived in a conservative Christian family and community that did not support her, and she suffered under loneliness, hopelessness, and depression. Upon her death, Leelah wrote: “The only way I will rest in peace is if one day transgender people aren’t treated the way I was, they’re treated like humans, with valid feelings and human rights.”

Equal dignity in the eyes of the law, our families, our communities, our religions, our society, and ourselves.

Authors Stuart Gaffney and John Lewis, together for nearly three decades, were plaintiffs in the California case for equal marriage rights decided by the California Supreme Court in 2008. John is the MEUSA Director of Legal & Policy; Stuart is the MEUSA Communications Director.