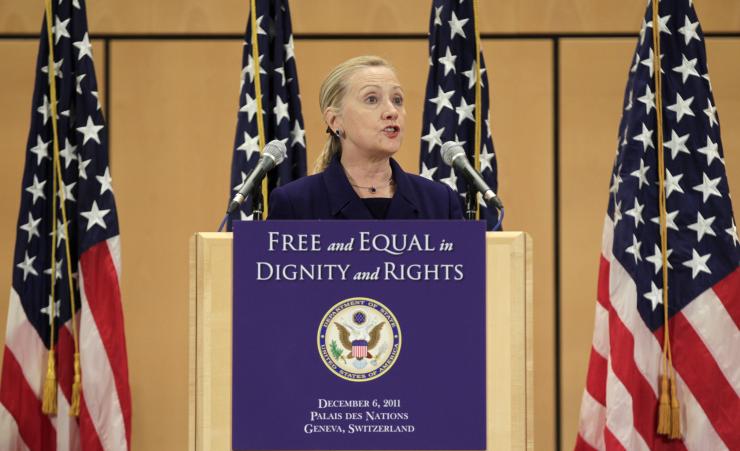 "Brian Silva, executive director of Marriage Equality USA, said Clinton was part of a growing movement of politicians on both sides of the political aisle who have come out for gay rights in recent years as more Americans demand marriage equality. He said the symbolism of Clinton's campaign message was significant.

"'Whenever we see our faces, our lives and our families reflected in political positions and businesses and in any kind of institution like that, it reflects where we’ve come, it reminds us that we still have a ways to go and it also inspires a new generation of young people that are questioning or struggling with coming out that they have places to go, that there is a future for them, that they can have whatever job they want and be the person they want to be,' he said."

PHOTO CAPTION & CREDIT: As secretary of state, Hillary Clinton addressed the rights of lesbian, gay, bisexual and transgender people from around the world in her "Free and Equal in Dignity and Rights" speech on International Human Rights Day at U.N. premises in Geneva Dec. 6, 2011. She is now running for president as a pro-LGBT rights candidate. Photo by Reuters via International Business Times.