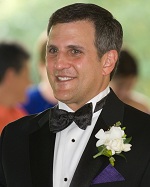 Steve has been active in the gay rights movement for more than 25 years, starting off as the leader of his college gay students' organization. He helped to found and lead the Peninsula Marriage Equality Coalition in the San Francisco Bay Area, following the passage of Proposition 8 in California. The Coalition chose to join Marriage Equality USA as an official chapter and Steve is now leading this chapter.

In June 2008, Steve married his partner of 4 years and in August of 2009 they celebrated that marriage with a large wedding among friends and family.