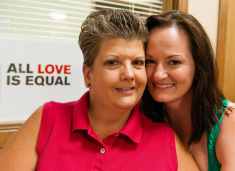 Jolene (on right in picture) believes she will see marriage equality in all 50 states during her lifetime. As a Christian, Jolene believes that God loves all His children and accepts each of us for who we are, gay or straight. Busy planning her wedding to Colleen, Jolene also loves to sing and act. She has been heavily involved in theater and films during her career. Her most recent stage appearance was playing the part of the "Sergeant" in The Pirates of Penzance, a fun singing role. Jolene's positive attitude is contagious! She puts that energy towards making marriage equality a reality for us all.