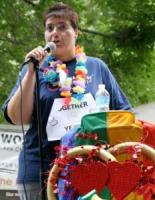 After having to hop the border to Canada in order to marry the love of her life, Jo added the "Voigt" to her "Meleca" and became Jo Meleca-Voigt. She and Christine Voight originally met in 2000 and were married in 2005. Both of the Meleca-Voigts have been marriage equality and political activists since they met. Jo is a middle school Italian and Spanish teacher and she also owns and runs GoJo Travel and Tours, specializing in organizing and escorting tours of Italy.

Jo is seeking additional organizers to serve in the Rochester/Finger Lakes region. Please contact her if you are interested. Jo is also involved in the formation of a 501c4 for MEUSA.