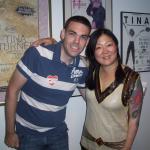 Jason became involved in the fight for equality during California’s Proposition 22 ballot initiative. The passage of this devastating initiative spurred him to join Marriage Equality California (MECA) in 2004. He has spent over a decade working towards full marriage equality with leading statewide and nationwide non-profit marriage equality organizations, and he continues to represent Marriage Equality USA in Fresno County, CA. Jason began operating local LGBTIQ resource websites in December of 2000 and was instrumental in opening the Fresno LGBT Community Center in 2011 and Gay Central Valley, a non-profit organization, in 2009. He continues his involvement in these endeavors, operating GayFresno.com. He is pictured at the left with Margaret Cho during a MEUSA fundraiser in Phoenix, AZ.

As a small business owner since 1999 Jason brings his years of fiscal responsibility, business skills and leadership to his role of Regional Organizer.

Jason and his husband RJ are raising their baby boy, Connor, in Clovis CA.