An LGBT Couple, Legally Married for 41 Years, Explains Why Marriage Equality Is Important to Them

A Conversation with Suzi and Dani Williams

Suzi and Dani: This year, we will have been married for forty-one years. We have been enormously happy together and can’t imagine being apart. We met and fell in love in 1972 when we were both undergrads at the University of California at Davis. We got married in 1974 in Reno, Nevada, soon after we finished at Davis.

Suzi: After we married, I began my career, working for the State of California, and Dani became a lawyer. We had two sons and raised them in Sacramento.

Dani: In 2002 – thirty years after Suzi and I met -- I revealed the darkest secret about myself that I had been hiding and repressing my whole life: I had known since I was 13-years-old that I had always been a transgender female inside. I faced a personal life or death crisis: To live with the truth or to die with the lie. I chose to live. I am heartbroken every time I hear of a transgender child being abused or committing suicide. I have been close to that feeling of desperation myself. I cry especially when I hear of a transgender kid being killed by another child, because both are victims of the lack of understanding that persists in our culture. 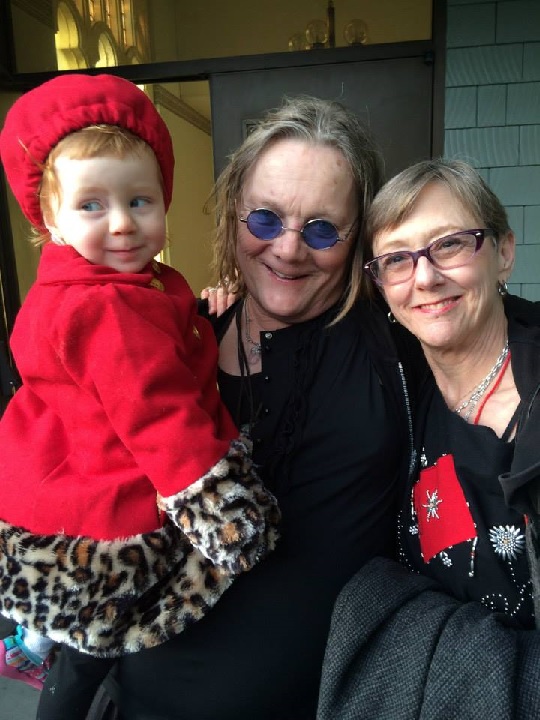 Suzi: As soon as Dani, who up until then had been “Danny,” shared her secret with me, I was completely fine with it. I love Dani, the person, and do not care what gender Dani presents to the world. My only concern at the time was Dani's safety. I was afraid of the coming ridicule.

Dani: I soon thereafter transitioned to being a woman and no longer hid who I was from anyone. We are very happy that so far no one has physically harmed Suzi or me because I am transgender and we are now a same-sex couple, although we shouldn’t have to face such risks in the first place.

Suzi and Dani: We are also very happy that our children and their spouses support us. We cherish the love of our sons and daughters-in-law and are grateful for their love and acceptance of us as a lesbian couple. We have also been blessed with two wonderful grandchildren.

Suzi: We recently retired and decided we wanted to move to be near one of our children so that we could take part in raising at least one of our wonderful grandchildren, and so we would be near family as we got older and needed help. But we faced a hurdle. We could only live in a state that respected our marriage and protected the rights of transgender people. The uncertainty and possible threat to our marriage was unsettling and distressing to us, particularly as we are later in life and more likely will need to rely on long vested rights secured by our marriage.

Suzi and Dani: Remaining legally married was and is essential to us. It is critical to our financial security with the vested social security, health, and pension benefits from the State of California that are secure for us as an LGBT couple in California. It is also critical to respect we deserve as Americans. We refuse to permit anyone to divorce us against our will. Sustaining our status of being legally married is vital to us. Our love is without end. Being married is a statement of our lifetime bond of love, which we cemented when we exchanged vows together and married forty-one years ago.

We decided we wanted to live near our son and his family who recently settled in Oregon. We immediately checked the status of LGBT equality in Oregon and were relieved to find out that the state recognizes marriages without regard to the gender of the spouses and that the state has many protections for transgender people.

We moved to Oregon and are very happy to be living there near our son, his wife and our grandchild. We are not certain that we would have moved to Oregon from California without marriage equality in Oregon. Living in Oregon where same-sex marriage is legal, is a huge blessing for which we are thankful. But the uncertainty surrounding marriage equality across the country is distressing. As Americans, we should have the freedom to be able to follow either of our son’s families to whichever state they might move without worrying about our losing our rights, protections, and security that the two of us have built together as a married couple.