History in the Making

The documentary showcases the movement’s highlights and lowlights, successes and setbacks with a behind-the-scenes look that was further discussed during a question and answer period which followed. Compelling moments include Edie Windsor’s declaration that, “no other word has that power,” while rallying marriage equality supporters. Duane noted the failure to achieve a majority in the New York State Senate the first time it was introduced. The State Senate’s first openly gay member, Duane commented after the screening that that first vote was essential to knowing who was really on board and who was not. Both he and Quinn credited the first failed vote with making the subsequent vote two-years later possible. 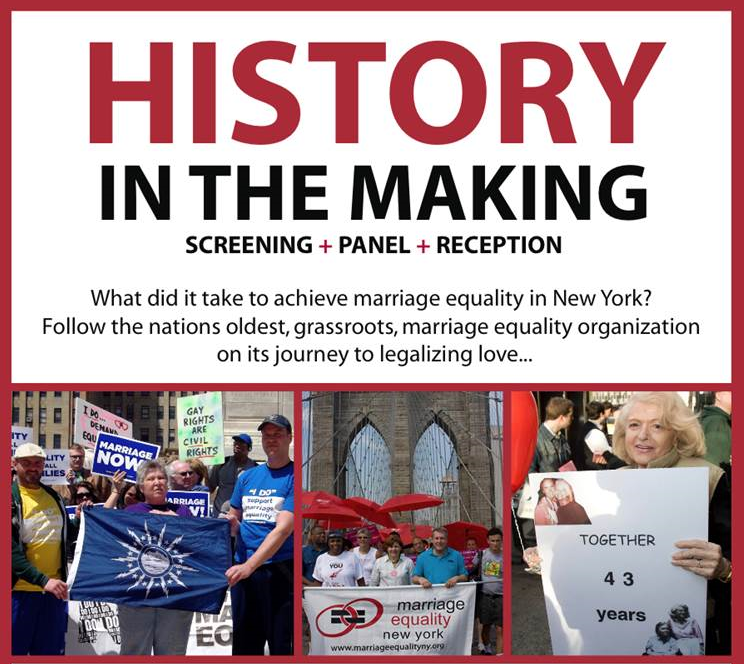 Darcy and Kate Tuscany are followed by cameras into the city clerk’s office in New York City as they attempt to have their new last name registered after having been married in California. The judge in California told them to have the official name change carried out in their home county back in New York. After being refused and given incorrect advice to “marry again” in Connecticut (it is a crime to legally marry in more than one jurisdiction), they were left in limbo with a child on the way. Cathy Marino-Thomas is shown in another segment where a gay couple and a heterosexual couple enter the same office asking for a marriage license. She makes the point that the gay couple is entitled to the “10” rights and privileges of domestic partnerships while the heterosexual couple is entitled to the 1100+ rights and privileges of marriage.

Marino-Thomas also pointed out that the entire marriage equality movement had started out with just six people in someone’s living room in New York back in 1996. “Half of the LGBTQ community thought we were crazy, the other half didn’t understand what we were doing.” Subsequent meetings grew exponentially, with a large segment of the LGBTQ deeming marriage equality a cause worth fighting for. Discussing the many different tacts taken to push the movement forward over the last two decades, Duane noted, “Ninety percent of what you do doesn’t matter. But you do it anyway, because you don’t know which 10% does."

Quinn relayed after the screening that much work still needs to be done. “In a lot of those states, you can get married on Friday and fired on Monday,” referring to those states which now have marriage equality but no prohibitions against firing employees on the basis of their sexual orientation.

** In 2012, MENY and MEUSA merged into the current MEUSA organization today. Click here for a complete history of both MENY and MEUSA.