"COME ON, ALREADY!" The Glitches of Implementing Marriage Equality

One might think that the elation resulting from the June 26th Supreme Court decisions in the DOMA and Prop 8 cases would ameliorate any feelings of impatience in the LGBT community. But, human nature being what it is, many of us moved very quickly from celebration to itching for the rights we will have access to –particularly those of us who are directly affected. Most of us are intelligent and fairly practical people who acknowledge that it takes time for creaky bureaucracies to move and change, but mixed with our anticipation there may also be an element of fear, that if things don’t move quickly it might all somehow never materialize. This fear is based in some reality for people who have lived through experiences such as marrying at San Francisco’s City Hall during the 2004 Winter of Love only to have their marriages legally invalidated 6 months later. Overall, the post-DOMA process seems to be moving fairly quickly and smoothly for same-gender binational couples, and the news that green cards were being issued in June was one of the first concrete examples that things really are changing. This past week’s news from the Department of Health and Human Services and the Department of the Treasury and Internal Revenue Service is encouraging and a relief. However, when it comes to extending equal rights to the families of LGBT military personnel and veterans we begin running into time frames and roadblocks that are enormously frustrating. In mid-July MEUSA received the following letter from two of our members (published as written with the author’s permission): 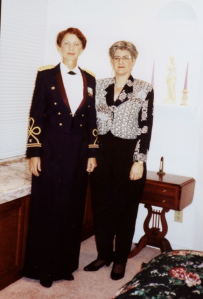 Barb and Pat dressed for Colonel Patsy R. Thompson's military retirement in 1993[/caption] June 26, 2013---ahhh, what a day in equality history and in our personal lives!  We now, after almost 29 years, have the right to all of the 1138 rights of a federally recognized and legally married couple in the state of California!!  Equality rocks!! Now on to the nitty-gritty of this significant event.  We spent the first few days in “pinch me” mode.  Hardly believing that Col. Pat Thompson’s 37 plus years of military service to this country would actually afford us the same benefits that millions of other veterans receive.  We took every legal step along the way to ensure this, if ever it were to materialize:  signing up as Domestic Partners in CA, spending thousands of dollars for trust agreements, marrying in San Francisco in 2004, marrying in Placer County, CA in 2008 and marching, demonstrating and constantly and consistently signing petitions to win our rights. The reality of the work it would take to achieve our goals was now staring us in the face.  But what a joyous task it would be!  We contact the agencies, let them know our status, fill out the forms and voila--benefits!  The beautiful groundwork of the various organizations that have been fighting this battle was already in place.  We had links to all types of bureaus and official offices that we could possibly need from Courage Campaign, Lambda Legal, National Center for Lesbian Rights, Human Rights Campaign, ACLU, Outserve-SLDN, Marriage Equality and more.  So on to the process...! [caption id="attachment_408" align="alignnone" width="560"] 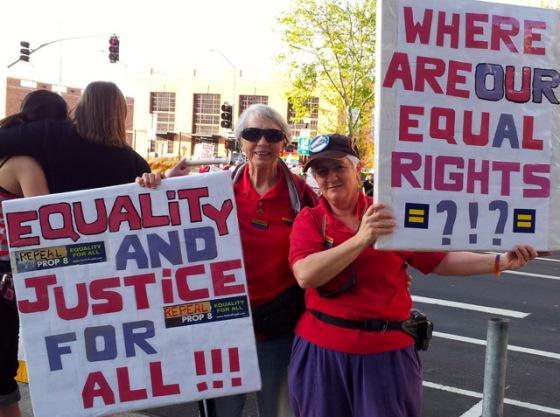 Barb and Pat in front of the Federal building, 2013[/caption] July 15, 2013 would be the day I got my military spouse ID card and all its attendant privileges!  An appointment was made, the documents we needed were in hand (marriage certificate, passport, driver’s license, birth certificate), we drove 40 minutes to the Military Offices in Sacramento, signed in through security and met with our ID card clerk.  Within 1 minute were told that the military will not be able to issue these cards until September 1, 2013!!!  This was not just a minor inconvenience and waste of time and gas, it was another slap in the face.  The LAW had changed and we expected to be treated just like any other married couple.  What had happened???  It felt like we were sliding back down into a deep well we had just struggled to climb out of.  What needed to be done at the Pentagon to cause a 6 week or longer delay in our first step up the ladder of equality???  Oh, perhaps they needed to rewrite the forms to say spouse instead of husband or wife.  Maybe it was necessary to print our forms in rainbow colors to distinguish “us” from “them”?  Did they want to give us a belated wedding gift with our benefits package and needed time to find our wedding registry?  What still made us different from any other married couple??? Are we alone in this? We ask for your response to this situation. Any feedback would be greatly appreciated. Ever hopeful, Pat Thompson and Barbara Brass Roseville, CA

Brass’ letter illustrates the impatience people are feeling – and her punctuation certainly emphasizes the emotions she felt when writing it! MEUSA’s Military/Veteran’s Community Liaison Ty Redhouse immediately responded and provided information from the Dept. of Defense Press Release that explained there would be a 6 -12 week process to begin issuing new identification cards. We haven’t checked in with Brass and Thompson to see if they have a new appointment to get Brass her spousal ID card. However, we’ve been following the news closely to watch as events unfold for other American military personnel and veterans and their spouses. On August 27, 2013 the Washington Blade published an article, Veterans benefits for gay married couples still denied, after they obtained a letter, dated August 14, from Secretary of Veterans Affairs Eric Shinseki to U.S. Senator Jeanne Shaheen (D-NH). In February 2013 Senator Sheehan introduced legislation to obtain benefits for same-sex married couples in the military. In the letter Shinseki stated that [Editor: as of the time the letter was written] LGBT military vets were not eligible for the benefits of marriage due to Title 38, a section of the United States Code that governs Veterans Benefits, which defines spouse in opposite-sex terms independent of DOMA. The Blade article was accompanied by a photo of MEUSA member Tracey Cooper-Harris and her legal wife Maggie Cooper-Harris. Cooper-Harris is a decorated, disabled veteran who sued the federal government for benefits she and her wife were denied under Title 38. On July 20, 2011 Cooper-Harris submitted written testimony for a U.S. Senate Judiciary Committee hearing on the legislative repeal of DOMA and the Respect for Marriage Act. On February 1, 2012 the Southern Poverty Law Center filed a lawsuit on behalf of Cooper-Harris and her wife charging that the Department of Veterans Affairs discriminated against them by denying them benefits and further charging that DOMA was unconstitutional. On August 30, 2013 we read the thrilling news that the Cooper-Harris lawsuit was settled by “a historic ruling that has declared unconstitutional sections of a statute that prevented the U.S. Department of Veterans Affairs (VA) from granting benefits” to Cooper-Harris and her wife. In addition to the Supreme Court DOMA decision and the Cooper-Harris victory, according to a New Republic article published on September 1, 2013, Senator Sheehan is proceeding with her bill, the Charlie Morgan Act, which would grant benefits to same-sex married couples in the military. Sheehan’s bill is named for New Hampshire National Guard Chief Warrant Officer Charlie Morgan, whose wife and daughter were denied survivor and other benefits after her death. Between the delay in accessing benefits and the quickly changing, and often confusing, news is there any wonder that people are feeling anxious and impatient? We think not. None of us can bear to think of the generations of LGBT couples who have gone before us and died never receiving the societal recognition, legal protections and financial benefits they deserved. We’d collectively jump off the nearest bridge. People are tired of waiting and they want the results of the Supreme Court decision in place NOW. The reality is that for many of us these benefits are not primarily about societal status or recognition. They are often about daily economics and security for us and our dependents. Edie Windsor, bless her, may be well-off, but most of us are not. Military personnel and their families, as well as retired vets, certainly fall into the category of people who need every resource and every bit of financial compensation that they are due. Although these reports do not focus on military families, we suggest checking out the Williams Institute research regarding poverty in our community and the All Children Matter report on how children are affected by social, legal and financial inequality. Perhaps the very best thing we can do with this time, this waiting, is to strive to gain something positive from it, or to do something positive with it. And, we can always take a long, deep breath and count to 10.
'analysis&opinion'