Posted on MEUSA Blog - Archive by Zac Maybury · October 09, 2013 5:00 AM
Marriage Equality USA has launched a new project – the National Equality Action Team (NEAT).  According to MEUSA Program Manager Tracy Hollister, the new project was conceived by the organization’s executive director, Brian Silva. Chaired by Marriage Equality USA, NEAT is envisioned as a vehicle for national, state, local, and grassroots organizations, as well as individual organizers, to mobilize out­-of-state marriage equality supporters in states with active marriage campaigns. These actions are done in coordination with, and with the support of, the local state campaigns. “Thousands of Americans who passionately support the cause of marriage equality find themselves living in a state without an active campaign and their passion lies dormant,” says Holister. NEAT now provides the opportunity for these advocates to connect with and support organizations in states like New Jersey and Illinois that have ongoing campaigns for marriage equality. Silva adds, “NEAT is a continuation of our work in winning campaigns in Minnesota, Maine, Maryland, Washington, Rhode Island, and Delaware.” In 2012, MEUSA mobilized many local, state, and national organizations to support the victorious efforts in those states and paved the way for the formation of NEAT. NEAT organizations are asked to support ongoing campaigns by recruiting volunteers from their own ranks and beyond via at-home phone banks, in-person phone banks such as those in New York City and Raleigh, and through canvassing – knocking on doors. These volunteers are then enlisted to support any ongoing marriage equality campaign as devised and run by the state-based organization. NEAT member benefits include e-mail alerts with details on how marriage equality supporters can get involved, resources to participate in campaigns, training for those who want to organize local events, such as phone banks, and the opportunity to be part of the national effort to win marriage equality nationwide. Christine Allen, MEUSA’s IT director, sums up the NEAT project as follows – “The National Equality Action Team epitomizes MEUSA’s commitment to working in cooperative coalition. Forget struggling in isolation or reinventing the wheel for the four hundredth time! It makes so much more sense for a variety of organizations and individuals to pool our resources, our brains, our experiences, and to enjoy each other’s company while accomplishing needed work. The other thing that is unique about NEAT is that it makes it possible for people to do remote phone banking from home. Do you have any idea how important that is to LGBT/allied folks who may not have a local community? Or, to people who are unable to get out of their homes to events and actions?  Or to busy folks who are juggling full-time jobs and parenting? NEAT provides a way for everyone to get involved – people who are often not included can contribute and be a part of creating history.” The almost 50 NEAT coalition members include faith-based groups like Adat Shalom Reconstructionist Congregation in Bethesda, Maryland, the Unitarian Universalist Fellowship of Raleigh, North Carolina, and the United Church of Christ; national and local chapters of LGBTQ organizations such as PFLAG, GLAAD, and HRC; and political groups like the Log Cabin Republicans, the Lesbian and Gay Democratic Club of Queens, and Lambda Independent Democrats – Brooklyn. “NEAT integrates MEUSA’s whole vision of empowering all advocates of marriage equality with its own mission of recruiting advocates to execute specific actions in ongoing campaigns,” says Hollister. Adds Silva, "This puts us on the path toward winning full marriage equality in all 50 states." Visit the National Equality Action Team website to learn more and to sign up to help bring marriage equality to all fifty states. 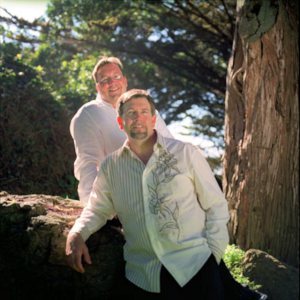 2004 Wedding Portrait of David and Jeff Janis-Kitzmiller (photo by Jessica Hobbs and Felicia Carlisle)[/caption] Contacting Dave Janis-Kitzmiller is often a challenge. He may be at the European headquarters of the parent company of the company he runs, speaking with reporters about marriage equality, accompanying his employees on their daily "paid-to-walk" excursions or any other number of diverse activities that compose his eclectic life. Christine Allen, MEUSA , relays Janis-Kitzmiller's personal involvement in MEUSA as being equally broad as well as indispensable. "Dave first became involved as a leader with Marriage Equality USA in 2004 when he and his partner (now husband) stepped up to serve as volunteer chapter leaders in Solano County, California. Dave quickly moved into areas of expanded responsibility, becoming the organization’s IT director, newsletter editor, and joining the Board of Directors in 2006. He authored our first leadership manuals and the original legal agreements for the organization. Dave put in innumerable hours over the years, often working alone late into the night and on all weekends completing projects nobody else was available to do." In fact, Janis-Kitamiller has served twice as president and once as co-president of the organization in addition to holding other executive offices with MEUSA. [caption id="attachment_393" align="alignright" width="300"] 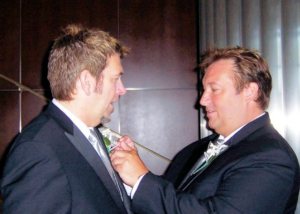 David Janis-Kitzmiller pins a boutonniere on his partner, now husband, Jeff, as they become the first same-sex couple married in Solano County in 2008[/caption] Janis-Kitzmiller counts establishing a chapter of Marriage Equality USA in conservative Solano County (the only one of the nine San Francisco Bay Area Counties to vote in favor of Prop 8) and providing a face to the issue as one of the achievements at MEUSA of which he is most proud. "Working within the community to educate and change opinions on marriage equality was a challenge, but very rewarding after being the first couple married in the county in 2008," he says, though adding, "I am probably most proud of seeing marriage equality restored in California and the Supreme Court’s ruling on DOMA. These two achievements were the icing on the cake for an outgoing board president that resides in California." Janis-Kitzmiller recalls MEUSA's unique role in opposing Prop 8. "Marriage Equality USA was able to step in and fill a void within the campaign to reach out and provide signs/materials to folks outside of the major CA cities. This helped to promote dialogue and involve the grassroots effort in the campaign. It was a great way to make sure voices were heard across the state where we had 'boots on the ground'." From an organizational standpoint, Janis-Kitzmiller seems almost awe-struck relaying the transformation of MEUSA. "I have watched this grow from a group of California marriage equality activist folks meeting in my living room to what it is today. To see MEUSA as a national organization with an executive director and affecting change across the nation is an amazing achievement.  The place that we have provided the grassroots individuals within the movement was so vital to changing hearts and minds across the nation.  Without MEUSA, the groundwork/fieldwork would not have been as successful in achieving marriage equality across the US." Like most people in the marriage equality movement, Janis-Kitzmiller had personal reasons for his involvement. "As an adult, I fell in love and found that because of my sexual orientation, I could not have what everyone else has, a marriage.  This didn’t make any sense to me.  I knew it was unfair and wanted to change things.  Since the early 1990s, I’ve been working to get equal rights for LGBT individuals. Part of this is due to selfishness in that I want the same as everyone else but, more importantly, it’s because there are many legal protections that our society’s laws provide to all except LGBT individuals: primarily with regard to family issues of marriage, adoption, death, hospital visitation, and survivor benefits. If we are all equal, created in God’s image, then why are our love and families not of equal importance? They deserve the same legal treatment as any other families." [caption id="attachment_392" align="alignleft" width="239"] 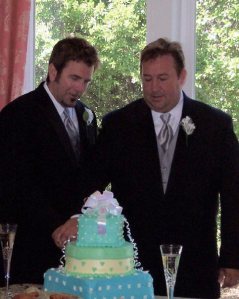 David (right) and Jeff Janis-Kitzmiller cut the wedding cake at their 2008 reception[/caption] Already, Janis-Kitzmiller sees positive results from the marriage equality decisions. "It has helped to strengthen the recognition of our relationship by others. Words really make a difference. Being able to explain to folks that you are married and that this is your 'husband' instead of 'partner' lets people know the status of the relationship. We have become the 'marriage guys' for our county, which has afforded us the opportunity to meet other LGBT couples and supporters throughout Solano County." He also recognizes the difference marriage makes to him, personally. "I think it helped to really solidify things.  Our relationship is legally recognized to be no different than anyone else's marriage. This has been helpful in achieving a better level of self-esteem as well as the legal protections, rights and responsibilities that come with marriage." Looking forward, Janis-Kitzmiller envisions being affiliated with MEUSA until marriage equality is achieved in all 50 states. "Although my role and level of involvement may change, this mission and the message won’t. I see us continuing in the way that has made the biggest impact, and that’s being visible. Having discussions with family, friends, coworkers, where we open our hearts and share our stories seems to be the successful path to changing minds of others.  There’s a lot of work left to do, but we will succeed in the long run."