Celebrating Today’s 4th Circuit Bostic Ruling -- Another Step Closer to the End of Amendment One! 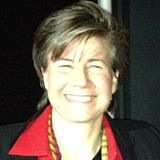 As a gay person, North Carolinian, volunteer working against Amendment One, and now full-time marriage equality advocate, I was thrilled by today's 4th Circuit Court of Appeals ruling in Bostic v. Schaefer and its potential - eventually - to erase the stain of Amendment One from North Carolina's constitution. Like the other 28 court rulings since last year's landmark Windsor case, the 4th Circuit decision declares yet another& anti-marriage equality ban unconstitutional. Here is my favorite quote from the decision:

Civil marriage is one of the cornerstones of our way of life. It allows individuals to celebrate and publicly declare their intentions to form lifelong partnerships, which provide unparalleled intimacy, companionship, emotional support, and security. The choice of whether and whom to marry is an intensely personal decision that alters the course of an individual's life. Denying same-sex couples this choice prohibits them from participating fully in our society, which is precisely the type of segregation that the Fourteenth Amendment cannot countenance.

Though this decision was about the Virginia ban, implications have the potential to go beyond Virginia since the 4th Circuit has jurisdiction over other states without the freedom to marry, like North Carolina, as well as West Virginia and South Carolina. I say “potential” because the ruling does not take effect for at least 21 days and could be appealed to the full 4th Circuit or the Supreme Court of the United States(a.k.a. SCOTUS).

As Chris Brook, Legal Director of the ACLU of NC, explained to me, it’s likely that the ruling will not become final for a while. He thinks that SCOTUS will probably review the case. If this happens, Bostic could be the case, or one of the cases, SCOTUS will use to make an ultimate constitutional ruling. I fully expect SCOTUS to affirm that there is a constitutional right to the freedom to marry for same-sex couples. This 50-state-solution ruling, some lawyers predict, could come as early as June 2015 or 2016.

The more immediate “potential” of Bostic – as outlined by the ACLU of NC and Equality North Carolina – is if SCOTUS does not review the case. Then, couples can marry in Virginia and courts in North Carolina and the other two states can issue orders to apply the Bostic precedent in their state rendering those laws unconstitutional. Knowing that a similar law in Virginia has been ruled unconstitutional by the governing circuit court, local clerks and governmental officials might start marrying couples even before the state court issues orders. However, it's not clear if state or federal government would recognize those marriages.

In both the long-term and short-term cases, one thing is clear: Amendment One is one step closer to fading into history as an unconstitutional relic of our past. So I’m doing a “happy dance” anyway! 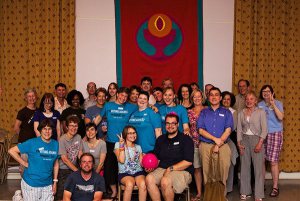 You see, I have a history with Amendment One. I was deeply involved in doing field work to defeat it for about a year -- from before it passed the NC General Assembly in September 2011 (by one vote) to the months leading up to when it overwhelmingly passed on 8 May 2012. I even resigned from my full-time job as a research manager to do all I could to defeat it; running 33 phone banks, speaking around the state and even being in a documentary about it, One: A Story of Love and Equality – which will be screened at the NC Gay and Lesbian Film Festival on August 17th and 21st.

All along, I instinctively knew Amendment One was unconstitutional. I felt it most strongly when I woke up on 9 May 2012, the morning after it passed overwhelmingly. I felt like we LGBTQ people had been “voted off the island” by our fellow North Carolinians. It felt like the tyranny of the majority – where decisions of a majority place their interests above those of an often misunderstood minority group. Amendment One – and other laws like it - was against what I understood America was all about. When I rode my bike in the Fourth of July parade at age seven (pictured below with a rainbow sweater on -- and I didn’t know!), I was proud of what our country stood for – freedom and equal opportunity. When Amendment One passed, it was a vote to restrict some people’s freedom to marry as an abuse of religious freedom.  It felt un-American. In America, we tolerate differences and we don’t deny people rights just because we don’t understand them – or at least, we don’t do this indefinitely. We eventually come to our collective senses. 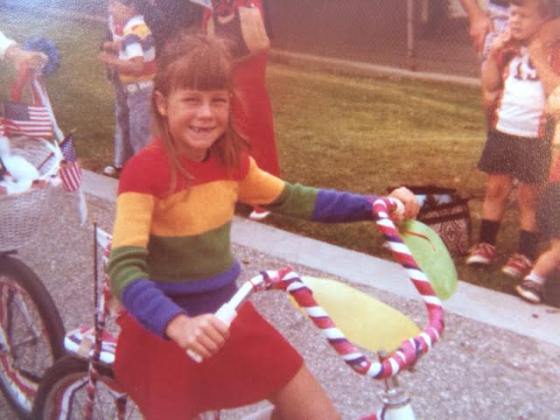 Yet despite the profound disappointment and loss we LGBTQ North Carolinians and our allies felt when Amendment One passed, the light at the end of the long, dark tunnel of voter-approved bans on our freedom to marry appeared the very next day – and has only gotten brighter and brighter since then.

Below is a summary of the things that have helped erode support for Amendment One, and laws like it nationwide. It includes my perspective watching the movement unfold as a full-time advocate with an up-close view -- as either a spectator with a “front row seat” or as a “player on the field.”

1) On May 9, 2012, President Obama came out for marriage equality in a TV interview. Then on 19 May 2012, the NAACP - encouraged by NC’s esteemed NAACP leader William Barber - also endorsed marriage equality. This had a big “permission giver” effect. I recall one poll where support among African American voters in Maryland, for example, shot up shortly after.

From June until November, I worked for a pro-equality state senator who was running against someone I considered the “son of Amendment One.” After that unfortunate loss, and a new Republican super-majority in both houses, prospects of overturning Amendment One were even bleaker. North Carolinians had to look to other states for any movement on this issue.

2) Amazingly, four states won their marriage-related campaigns at the ballot in November 2012 – three to pass marriage equality (MD, ME and WA) and one (MN) to defeat another marriage ban. Having lived through the North Carolina experience (which had been common in about 30 other states before us), I was astounded at these results. I attended conferences in DC and Atlanta to find out how we won. It wasn’t just that sometime in 2012 many national polls showed a new majority supported the freedom to marry. Our movement had also gotten smarter about messaging in our campaigns. We dropped our focus on legal rights. Instead, beautiful TV commercials conveyed positive messages by “straight messengers” like:

3) In May 2013, I was lucky enough to get a job doing what I wanted to do – be a professional advocate for marriage equality. I moved to New York City to start working for Marriage Equality USA on May 8th – which was symbolically exactly a year after Amendment One had passed. Just after both Delaware and Rhode Island passed marriage equality, I began running phone banks in Times Square for Minnesota and Illinois, followed by New Jersey, Indiana and New Mexico for the National Equality Action Team (NEAT). MEUSA leads this coalition of nearly 50 organizations. For each state campaign, we had phone bankers calling voters in those states virtually from across the country -- including many volunteers I recruited from North Carolina. In fact, we set up a phone bank specifically for Illinois and then Indiana and New Mexico at the Unitarian Universalist Fellowship of Raleigh. Our proudest moments were in assisting Illinois with over 700 voicemail messages left for 12 swing legislators – six of whom went our way – and marriage equality passed by just one vote. Likewise, in Indiana – which is arguably more conservative than North Carolina - we contributed to a close vote where legislators changed their extreme Amendment One-like bill, preventing it from going to the ballot in 2014 – and likely ever.  At this point, I do not think it’s politically possible for any other state to even propose an anti-marriage equality amendment; their time has passed. North Carolina has the distinction of being the last state to pass one of these, and depending on what happens with SCOTUS and the Bostic case, it may be the shortest-lived amendment. 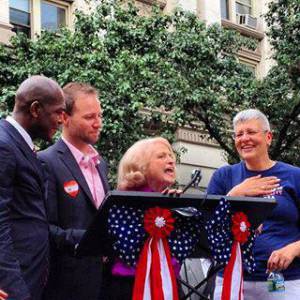 4) The big game-changer was the Windsor decision on June 26, 2013. One cannot overstate its impact. It has bolstered the case for marriage equality in federal courts, resulting in victory after victory with no losses. There are now 76 lawsuits among all the states that do not have marriage equality, including three that challenge Amendment One directly.

I had the opportunity - though our former long-time Board Chair Cathy Marino-Thomas – to ask Edie Windsor what gave her the courage to persist despite people saying her case was premature and could backfire with SCOTUS. Here is her reply in this short video:

5) Immediately after Windsor, federal discrimination against legally married, same-sex couples started to end – agency by agency – when they based their definition of who was married on the state in which a couple was married rather than their state of residence. It gave the out-of-state marriages of my friends in North Carolina legal meaning, with several hundred federal rights being extended to them for the first time. When I flew back to NC to commemorate the two- year anniversary of Amendment One on 8 May 2014, I noticed how many couples I knew were having spring weddings in nearby states.  And as part of the courageous and beautiful WE DO campaign to raise awareness about their desire to marry and injustice of laws that deny this freedom, many North Carolina couples including Clifton and Dennis (and couples throughout the South) applied for marriage licenses in their home counties with the Campaign for Southern Equality. I was able to be there that day in my home town of Raleigh, NC to witness this. 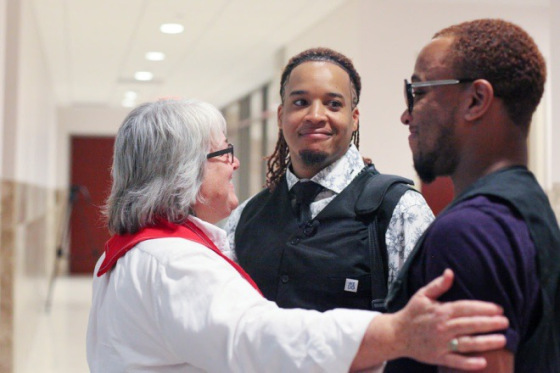 These are some of the events that have chipped away the legal credibility and morality of what was only two years ago an amendment which passed overwhelmingly. I am grateful that the 4th Circuit Bostic decision is the latest and most direct hit to Amendment One. The rising tide of justice across the United States and in our neighboring state of Virginia all help lift the gloomy cloud of Amendment One to clear the way to truer, bluer skies in my home state. I know that in a few days, when I leave New York -- which just celebrated its third anniversary of marriage equality last week -- and drive through Virginia back to North Carolina, I will come home with an even greater sense of hope that we LGBT people will be treated as the constitutionally and morally equal citizens that we know we are.

By Tracy Hollister, Program Manager, Marriage Equality USA. Tracy lived in North Carolina for nearly 20 years and worked as a volunteer marriage equality advocate for several years before moving to New York City to help advance marriage equality across the country. Now, the same week as the landmark Bostic decision, Tracy is moving back home to North Carolina to continue her work for MEUSA. To hear how and why she became a full-time advocate, listen to this half hour podcast.