Posted on MEUSA Blog - Archive by Zac Maybury · October 18, 2013 9:00 AM
Twenty years after the Hawaii Supreme Court ruled in favor of gay couples seeking marriage licenses, a decision subsequently overturned by voters, Hawaii is on the cusp of becoming the 14th marriage equality state. Gov. Neil Abercrombie has called a special session of the Hawaii legislature to consider marriage equality legislation to begin October 28th. Marriage Equality USA’s National Equality Action Team (NEAT) will be mobilizing out­-of-state marriage equality volunteers from the Western states as well as night owls from other states to staff phone banks to call likely supporters in Hawaii during a national “night of action” on Thursday, October 24th starting at 7:30 p.m. PT/10:30 p.m. ET. Volunteers can sign up to participate in the October 24th night of action or other NEAT actions at the NEAT website. The NEAT coalition was initially formed in the Spring of 2013 to follow up on the extraordinary success of MEUSA's work with 20 organizations that helped bring about the historic ballot victories in the Fall 2012 in winning marriage in Maryland, Washington, and Maine, and helped defeat an anti-gay marriage amendment in Minnesota. NEAT is now about 50 organizations strong and provides support for all active state marriage campaigns (legislative or ballot initiatives). NEAT callers reach out to voters in districts whose state legislators have not yet confirmed support for marriage equality bills. After determining that a voter does indeed support marriage equality, the phone bank caller can immediately connect them to their respective legislator’s voice-mail where they can identify themselves as a constituent and urge the legislator to support marriage equality bills. MEUSA Executive Director Brian Silva says, “Since 1991, Hawaii has been at the forefront of the fight for equal rights for LGBT families. Today, MEUSA takes another important step as an early member of the 'Hawaii United for Marriage' coalition by organizing supporters across the country to take action in support of our friends and family in the Aloha State." To volunteer at an in-person phone bank, location of your choosing, or from the comfort of your own home, simply sign up at the NEAT website. Phone banking from your own home is at no additional cost to you; the phone calls are made via your computer and existing Internet connection rather than via your land-line, long-distance, or mobile telephone service.

MEUSA and NEAT Canvass for Marriage Equality in New Jersey 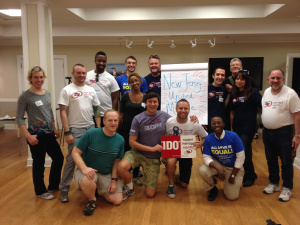 Volunteers and staff from MEUSA pose with New Jersey United for Marriage staff before spending time canvassing[/caption] Marriage Equality USA Executive Director Brian Silva and eight other volunteers spent October 5th in Summit, New Jersey, canvassing in support of New Jersey United for Marriage (NJUM) - the campaign to win marriage in that state. This action was part of the National Equality Action Team (NEAT), MEUSA's newest initiative to draw together winning coalitions of marriage equality supporters. As New Jersey moves toward marriage equality, Gov. Chris Christie continues to oppose full equality for all citizens of the state. "Gov. Christie's aggressive style will only strengthen our resolve," says Silva. MEUSA's NYC-ROC will be back in Northern New Jersey on Oct. 16th and 26th. According to Silva, "This was our first time canvassing in New Jersey and we had quite a positive response." MEUSA also is looking forward to its Philadelphia ROC hosting a similar event November 10th as part of the NEAT initiative. Bob Sullivan, Philadelphia ROC local organizer said, "We expect the same positive reaction in South Jersey. The Philadelphia ROC is getting involved because South Jersey is suburban Philadelphia and most people do as much business down the shore or across the Delaware River as they do here in Philadelphia. We're fighting for marriage equality here in Pennsylvania and it's important to us that our marriages be recognized whether we live, travel do, or do business in Pennsylvania, Delaware, or New Jersey. We're going to fight for the support we need to override Gov. Christie's veto." More information can be found at www.theneat.org.

Posted on MEUSA Blog - Archive by Zac Maybury · October 09, 2013 5:00 AM
Marriage Equality USA has launched a new project – the National Equality Action Team (NEAT).  According to MEUSA Program Manager Tracy Hollister, the new project was conceived by the organization’s executive director, Brian Silva. Chaired by Marriage Equality USA, NEAT is envisioned as a vehicle for national, state, local, and grassroots organizations, as well as individual organizers, to mobilize out­-of-state marriage equality supporters in states with active marriage campaigns. These actions are done in coordination with, and with the support of, the local state campaigns. “Thousands of Americans who passionately support the cause of marriage equality find themselves living in a state without an active campaign and their passion lies dormant,” says Holister. NEAT now provides the opportunity for these advocates to connect with and support organizations in states like New Jersey and Illinois that have ongoing campaigns for marriage equality. Silva adds, “NEAT is a continuation of our work in winning campaigns in Minnesota, Maine, Maryland, Washington, Rhode Island, and Delaware.” In 2012, MEUSA mobilized many local, state, and national organizations to support the victorious efforts in those states and paved the way for the formation of NEAT. NEAT organizations are asked to support ongoing campaigns by recruiting volunteers from their own ranks and beyond via at-home phone banks, in-person phone banks such as those in New York City and Raleigh, and through canvassing – knocking on doors. These volunteers are then enlisted to support any ongoing marriage equality campaign as devised and run by the state-based organization. NEAT member benefits include e-mail alerts with details on how marriage equality supporters can get involved, resources to participate in campaigns, training for those who want to organize local events, such as phone banks, and the opportunity to be part of the national effort to win marriage equality nationwide. Christine Allen, MEUSA’s IT director, sums up the NEAT project as follows – “The National Equality Action Team epitomizes MEUSA’s commitment to working in cooperative coalition. Forget struggling in isolation or reinventing the wheel for the four hundredth time! It makes so much more sense for a variety of organizations and individuals to pool our resources, our brains, our experiences, and to enjoy each other’s company while accomplishing needed work. The other thing that is unique about NEAT is that it makes it possible for people to do remote phone banking from home. Do you have any idea how important that is to LGBT/allied folks who may not have a local community? Or, to people who are unable to get out of their homes to events and actions?  Or to busy folks who are juggling full-time jobs and parenting? NEAT provides a way for everyone to get involved – people who are often not included can contribute and be a part of creating history.” The almost 50 NEAT coalition members include faith-based groups like Adat Shalom Reconstructionist Congregation in Bethesda, Maryland, the Unitarian Universalist Fellowship of Raleigh, North Carolina, and the United Church of Christ; national and local chapters of LGBTQ organizations such as PFLAG, GLAAD, and HRC; and political groups like the Log Cabin Republicans, the Lesbian and Gay Democratic Club of Queens, and Lambda Independent Democrats – Brooklyn. “NEAT integrates MEUSA’s whole vision of empowering all advocates of marriage equality with its own mission of recruiting advocates to execute specific actions in ongoing campaigns,” says Hollister. Adds Silva, "This puts us on the path toward winning full marriage equality in all 50 states." Visit the National Equality Action Team website to learn more and to sign up to help bring marriage equality to all fifty states.